Over the last few weeks, GRI Club has added new features to the members-only platform, improving the user experience and making networking easier.

“The idea is to allow the highest level of relationships between executives with common interests, generating real business opportunities in a reserved and exclusive environment for members”, explains Gustavo Favaron, GRI Club CEO.

“The features we implement are always based on the user’s experience on the platform. This chat, for example, was born from the need to have a faster message exchange channel, which came from talking to users,” continues Favaron.

The demand was brought to the GRI Club technology department, which implemented the new function in a short time. The tool has already been widely used and has increased interaction on the platform.

Aimed at real estate, infrastructure and agribusiness market decision makers, the platform is only accessed by C-level executives, who are accepted into the club after a strict analysis process.

It does the matchmaking of the members according to the profile information and the indication of interests filled by the executives themselves. “You gain time and reach by knowing which people have the most synergy or interest in being a partner,” Favaron says.

Today, the GRI Club platform connects more than 11.000 members spread over more than 100 countries on all continents. The main markets are Latin America, Europe and India.

Get to know some of the main features

Chat
With the newly implemented chat feature, you can see which executives are online at the same time as you for instant messaging. You can also write to someone who is offline and get a reply later.

Private meetings
1:1 (one-to-one) meetings in a virtual environment. This feature allows you to send an invitation to participants with two suggested dates/times and a comment about your interest in the meeting.

Introduction request
This tool allows you to request the account manager to assist in scheduling meetings with other club executives.

“The platform was launched in 2020, and we have continually improved its functionalities based on the demands and suggestions from members,” says Rodrigo Branchini, CTO of the GRI Club.

Assertiveness and time savings are the platform hallmarks

By suggesting meetings according to the relationship of interests and areas of activity of the users, the platform increases the chances of success in the search for new business partners and drastically reduces the time spent on this process.

Accepting only senior executives in the participants’ list guarantees high-level meetings: by being invited to a chat room, the GRI Club member can be sure that there are good opportunities there, from C-level to C-level.

“We can safely say that it is the best tool on the market for networking among senior executives. It is an environment for those who do not want to waste time and the contacts of the main players in the real estate sector, infrastructure and agribusiness”, ratifies Gustavo Favaron.

Check out the types of membership and their respective benefits included below: 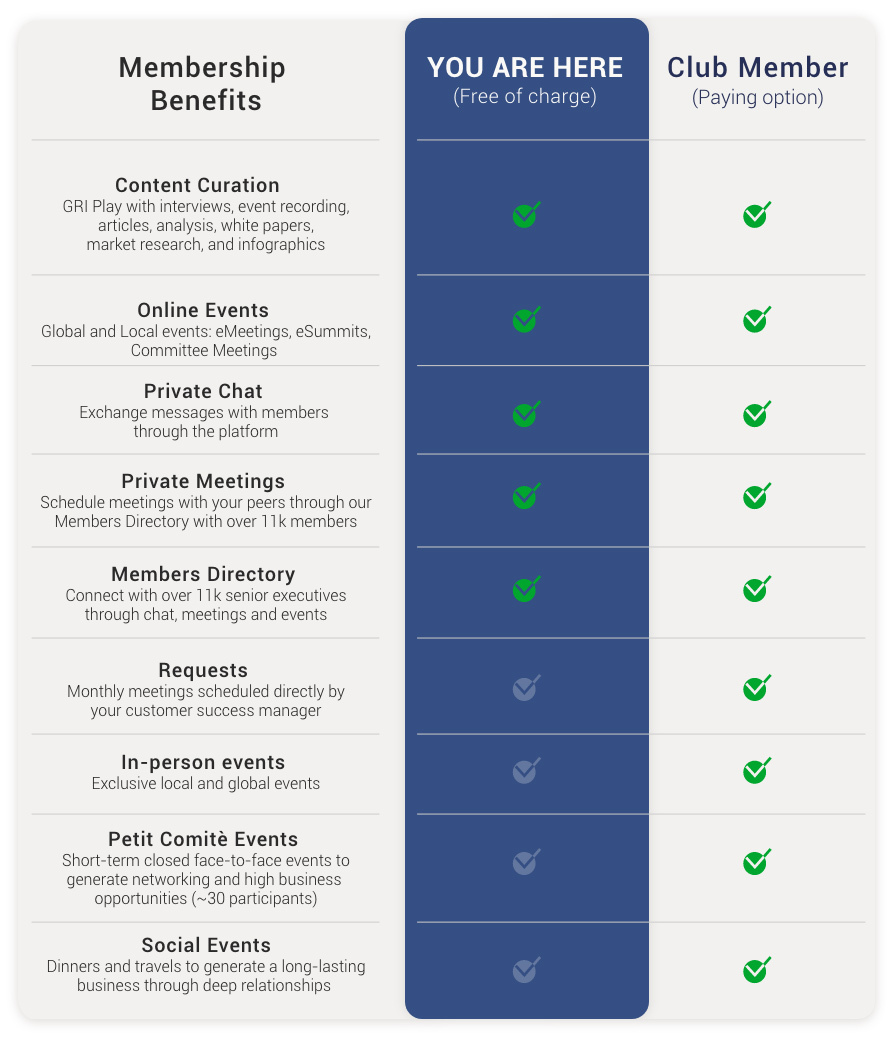 Get to know more about GRI Club

How to demolish a building in Paris
Read more

Edge of an economic void or should we be optimistic?
Read more

How does automation impact the logistics sector?
Read more