A milestone in GRI Club’s history in Brazil, the event consolidated itself as a meeting point for real estate leaders.

GRI Club held Brazil GRI 2019 on Tuesday and Wednesday (November 12 and 13), at Grand Hyatt São Paulo. The edition – which celebrates the tenth anniversary of the conference that began the club’s journey in the Country – brought a series of important discussions to the real estate industry. Topics such as economic and real estate recovery, expectations for 2020, the expansion of the capital market’s stakes in funding this market, the segments that are expected to stand out over the coming months, and the challenges of serving new consumers of different real estate products dominated the debates.

“Looking back over the past decade, I realize that we have become a community of leaders who propose to come, share business, and exchange experiences. We have become a hub for the international capital coming to Brazil. There is friendship among people who share the same purpose,” said GRI Group CEO Gustavo Favaron at the opening of the event.

“We really liked the way GRI interacts from the beginning. We planned 80 meetings for these two days of Brazil GRI 2019, something that greatly maximizes our time. We have more and more friends and customers here,” said Walter Cardoso, president of CBRE Brazil, who has attended throughout the decade, giving his testimony on stage.

The general tone of the meeting was encouraging, marked by optimism and a predominantly positive outlook. Most of those present had a clear view that real estate resumption is in fact expected to take place with greater vigor from 2020. Even the audience was invited to speak up – in a quick informal poll – about the horizon for the next 24 months, and most of them signaled they expect there will be progress. However, in general, a more favorable mood was noted among the Brazilian players than among foreigners – especially those who do not have extensive experience in the Country.

On both days, the conference started with an already traditional panel with international investors, while on the second day there was also a specific discussion room about the local attractiveness to foreign contributions, one of the most crowded of the entire program.

In the session held on the 12th, special guests were Adam Gallistel, managing director and head of the real estate area of GIC (Singapore sovereign wealth fund) for the Americas, and Sylvain Fortier, head of Investments and Innovation at the Canadian outfit Ivanhoé Cambridge. Moderation was by Henri Alster, the chairman of the GRI Group.

Among other issues, Gallistel expressed interest in distressed assets in Brazil, but he said he does not see them at the moment. Fortier, on the other hand, said there is appetite for housing for rent – considering a reality such as that of São Paulo –and for gentrification projects in degraded urban areas. They also discussed topics such as proptechs, sustainability, and green buildings, in addition to the reconfiguration of the shopping and retail segment advancing in the offer of experiences.

On the second day, Tom Heneghan, CEO of Equity International, Tom Shapiro, president and CIO of GTIS Partners, and Paulo Dias, CEO for South East Europe, Africa, and Brazil at IWG (owner of brands such as Regus and Spaces) shared their views, moderated by GRI Group CEO Gustavo Favaron.

Shapiro said he sees this as a very special moment for Brazil, and Dias unveiled his company’s accelerated growth plans in Brazil. Heneghan proved to be the most cautious of the three, but highlighted the elements that could draw his attention to the transfer of capital: Scale, adequate reward for risks, and good local partners with a business plan that makes sense.

Maintaining its fundamental characteristics of promoting high level networking and discussions on the most relevant real estate topics, the 2019 edition of Brazil GRI featured over 20 thematic sessions, which took place throughout the program in simultaneous rounds. Topics covered the prospects for next year in the different segments – residential, land development, offices, industrial & logistics, hotels, and shopping malls & retail –, market challenges, the investment landscape, and what the future of real estate sales will look like.

The debate that sought to outline what the real estate market will look like in 2020 portrayed a feeling of improvement – especially in São Paulo, but one that is also starting to take place in Rio de Janeiro, based on indicators and on the players’ perceptions. The impacts of the lowest interest rates in history in Brazil dominated much of the conversation.

The good moment of real estate investment funds (FIIs), driven mainly by the drop in the Selic rate, today standing at 5%, was reflected in the great participation in the discussion about the horizon of this type of contribution. Crowded, the room addressed this market’s evolution and development, the growing dissemination of information, the need for increasing educational work with different investing audiences, as well as the potential of instruments such as Certificates of Real Estate Receivables (CRIs) FIIs, multimarket funds and fund funds. 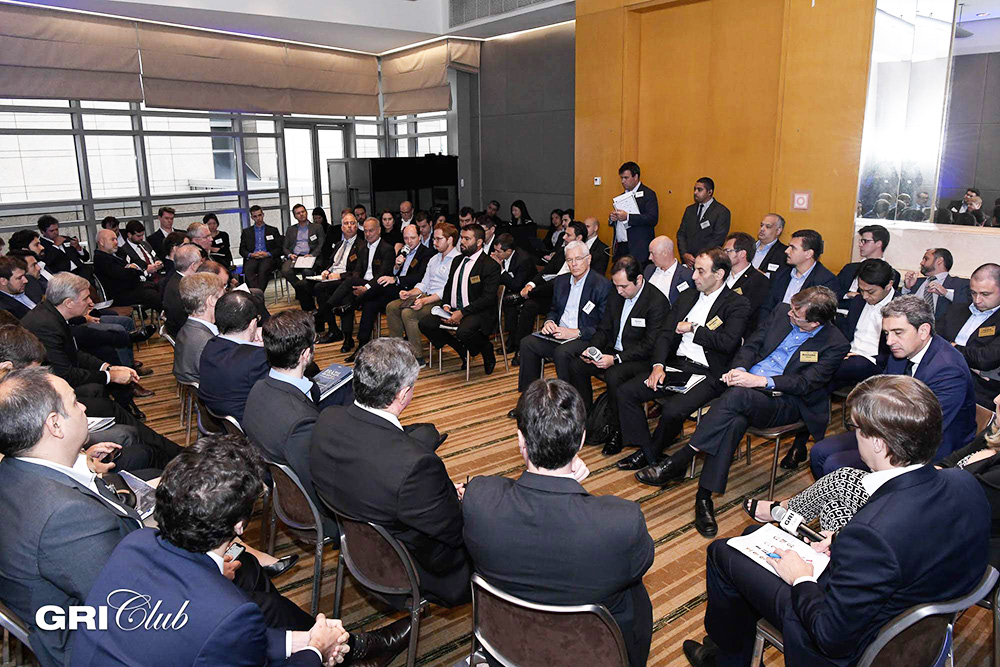 The increased penetration of the capital market as a source of funding for the real estate industry was the topic of the real estate credit room. It also addressed the potential for the Real Estate Securities (LIG) to take off, the challenges of lending in the medium and long term, and the recent rate reductions in funding lines.

The shopping mall & retail area was another theme that was analyzed. Points discussed included the segment’s resilience faced with the crisis of recent years in Brazil; improved asset performance with occupancy rate recovery, and the challenges for greenfield projects. The consumer’s journey and the different types of personas were also brought up.

The future of segments such as the hotel industry and industrial & logistics real estate were also on the agenda. For the hotel market, among other things, there is a perception of a noticeable improvement in São Paulo, but one that is also gradually felt on other markets, such as Rio de Janeiro and Belo Horizonte, in terms of occupancy and rates. Also noticeable was the expected increase in the presence of lifestyle brands, which tend to provide superior RevPar.

Warehouse and logistics complex players, in turn, spoke about new markets, opportunities, and challenges facing the advance of e-commerce and demand for new last mile spaces. In the debate, real estate executives were able to exchange ideas and experiences with companies that operate in a digital environment, such as Natura and Ricardo Eletro. The atmosphere was timely to talk about new business and potential products. 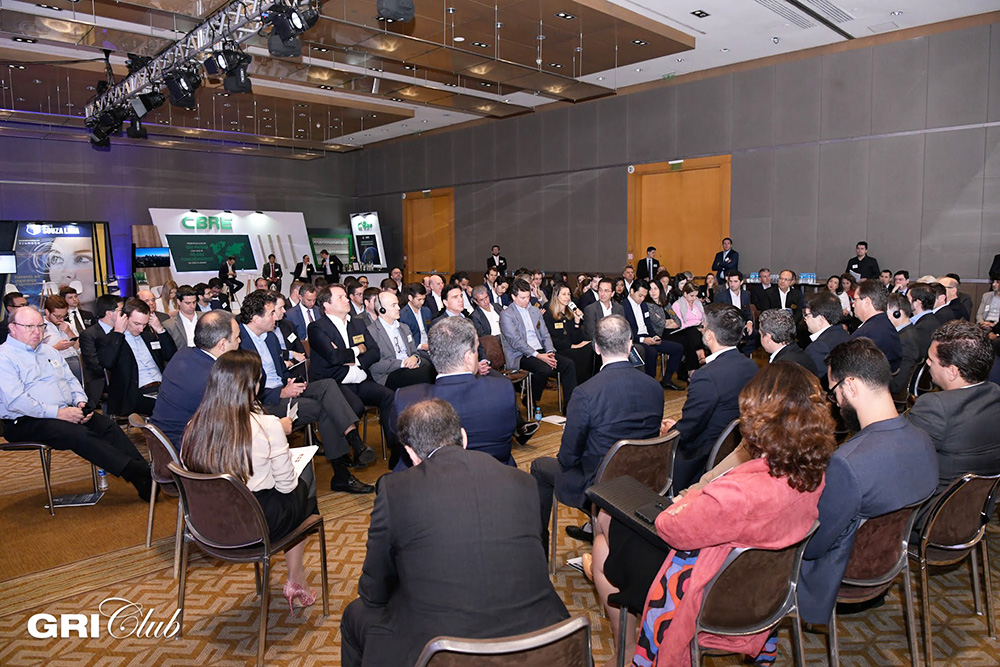 In sessions aimed at discussing the future of the real estate market linked to innovations and technology, Brazil GRI brought rich analyses of the potential of the

proptechs and new applications. In the funding and credit room, discussions focused on the advent of new peer-to-peer lending (loans between individuals) and how to expand this market.

Another debate that attracted great participation was the one dedicated to the future of real estate sales. Session participants talked about how technology can contribute, via virtual reality, to provide customers with experiences – optimizing the search process for a property and complementing or even replacing traditional alternatives such as stands, decorated apartment mockups – reducing red tape, facilitating the generation of more assertive leads, and the lending process. The prospect is that in the future it will be possible to offer customized real estate products to each client, delighting them with assertiveness.

Brazil GRI also had a presentation by Adevani Rotter, president and founder of Ação Integrada, on ‘Communication that generates results.’ She stressed the importance of internal communication in companies to promote employee engagement with the strategy and drive results.

The closing of the tenth edition of Brazil GRI was dedicated to the technology revolution and to how to transform the real estate industry into an increasingly smart and innovative industry, with Roberto Prado, CTO of Microsoft Brazil. In addition to addressing issues such as the presence of artificial intelligence and other new technologies that are already affecting people’s lives, including in the real estate industry, he brought up important questions to the audience attending the event, such as the companies’ worldview, the need for ever faster deliveries, and how change interferes with all choices.